This is a striking Downloadable Photo of the famous "Yukon and White Pass" narrow-gauge railroad in Alaska. 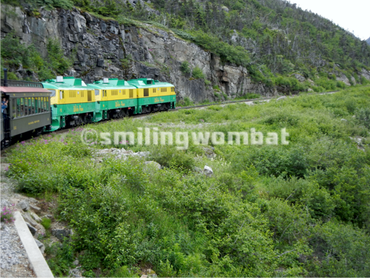 The railroad began construction in 1898 during the Klondike Gold Rush as a means of reaching the goldfields. With its completion in 1900, it became the primary route to the interior of the Yukon, supplanting the Chilkoot Trail and other routes. The route continued operation until 1982, and in 1988 was partially revived as a heritage railway. It still operates today as a Tourist Railroad.

This Downloadable Photo is approximately   8 inches by 10 inches.  In PDF format at 300dpi.

You can print this on paper, canvas, photo paper, or any other material that your printer will support.

This Downloadable Photo is suitable for framing, placing on walls, or making computer wallpaper.  The choice is yours.

Get this picture for your Den, Kids Room, or Man Cave today!

Click on the "Add to Cart" Button Now to Get This Photo!

* Frame not included.  This is a downloaded product.